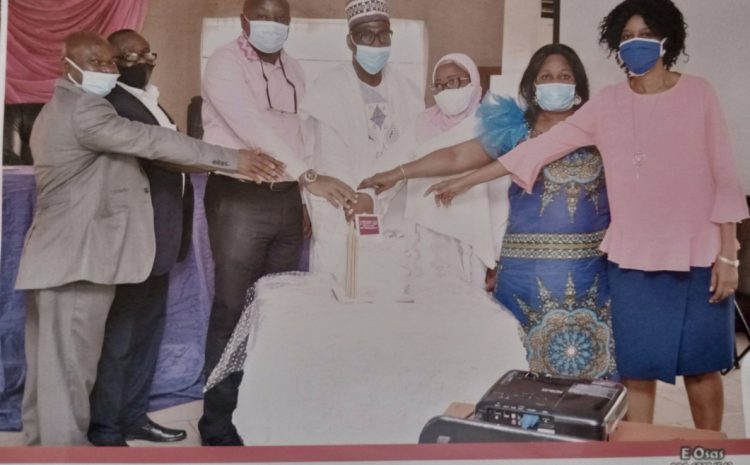 It was a celebration galore yesterday Wednesday 20, 2021, at the Federal Neuro-Psychiatric Hospital, Benin City as Management of the hospital honored Mr. N.U. Igbinidu in a retirement send forth party. Until his retirement from Public Service, Mr. Igbinidu was the head of the Internal Audit department of the hospital and served meritoriously for 35 years.

Dr. Omoaregba described the retiree as a diligent, straightforward, and a very humane personality whose rare unique character speaks volume and is worthy of emulation. According to him, “Mr. Igbinidu is one of the few persons that everyone agrees that his character speak for himself. He is also one of the few people that have allowed the religion they practice to be part of their daily work in life. In every manner, the celebrant is very diligent, straightforward, and hardworking. These unique characters have been brought to bear in his work as an Accountant and an Auditor, and I think he was uniquely qualified for those positions and the hospital has benefited from it immensely. Mr. Igbinidu, I want you to know that, we appreciate you a lot, these unique characters that you have we pray that you are able to pass on to those that will come after you so that the hospital can benefit from them as well. Now that you are retiring, we thank God that you are retiring in good health…we pray that in your retirement, you would continue to be hardworking as you were while you were still in the service of the hospital”.

Dr. Omoaregba also appreciated the retiree’s wife Hajia Florence Igbinidu for her support to her husband and the children that God has blessed them with, and prayed that his family would continue to grow in strength and prosper in all their efforts.

Others who spoke during the occasion eulogized him describing him variously as a Man of Integrity, a good adviser, industrious, dedicated to work, accurate, transparent and an embodiment of humility – characters worthy of emulation.

Responding, the celebrant appreciated Management, family members, well wishers and all those who contributed towards his success, thanking God for the modest achievements in his life.

Gifts such as: Washing Machine, Air Conditioner among others from Management, members of Staff of the Internal Audit department, and SSAUTHRIAI were presented to him. This was followed by a group photograph session with the celebrant.