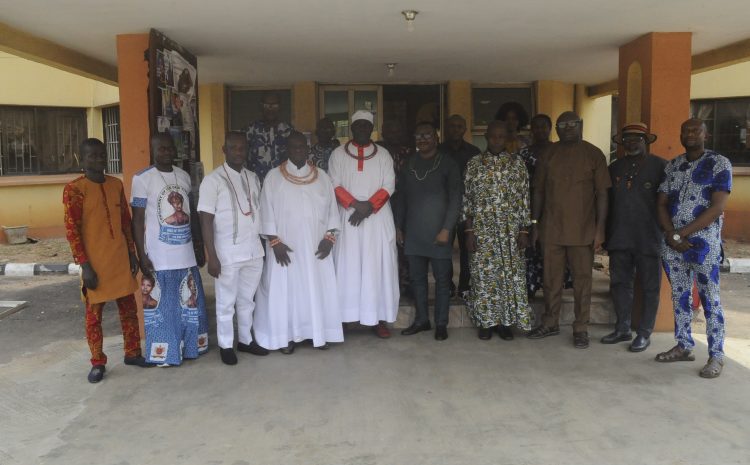 The Chief Priest of the Benin Holy Aruosa Cathedral on Friday 4th February, 2022 paid a courtesy visit to the Medical Director and Management of Federal Neuro-Psychiatric Hospital, Benin City.

The Priest, Ohenosa Igbinoghodua Edebiri who came in company of his church functionaries and some palace Chiefs informed the Medical Director that the essence of his courtesy visit was to familiarize with the new Administration of the hospital. He noted that the Benin Holy Aruosa Cathedral was an Altar of direct Worship of Almighty God without any intermediary, and not a fetish place as some people have misconstrued it. He explained that the Holy Aruosa Cathedral, also known as, the Benin National Church was established by the Portuguese Missionary Traders in the 15th Century during the reign of Oba Esigie in Benin. Continuing, he said that the Cathedral was first sited in Ogbelaka Street, Off Benin-Sapele Road, before it was later moved to its present location at Akpakpava Road in Benin City. According to him, the Cathedral was on 11th December, 1945 converted to its present state by the then Oba of Benin, Oba Akenzua II and ever since the Cathedral has growing in strength.

In his remarks, the Medical Director, Dr. I.O. Agbonile welcomed and expressed his profound appreciation to the Special Guest for the courtesy visit, stating that it was a great honour and privilege to receive him in the hospital. He also thanked him for the enlightening history that he gave about the Cathedral. He thus urged for continuous cordial relationship which has long existed between the hospital and the Holy Aruosa Cathedral.

In a vote of thanks, the Head of Public Relations and Protocol, Stewart Efe on behalf of Management thanked the revered Chief Priest and his entourage and noted that the visit has helped to further strengthen the good existing relationship between the two institutions. He used the opportunity to keep the Guest abreast of the developmental strides of the Dr. Agbonile-led administration in the hospital within a short period of time. A booklet containing a brief history of the Benin Holy Aruosa Cathedral was presented to the Medical Director by the Chief Priest. This was followed by a group photograph session of the Hospital Management Team and the Special Guest with his entourage.